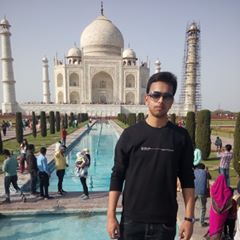 I created this website to help frustrated employees who are sick of getting stuck in traffic while going daily for their 9-5 job and hating themselves doing that everyday, to find a remote and flexible job so that they have more time in living life, rather than just surviving it.

I believe everyone should try a remote job at least once. Having a flexible remote job changed everything for me. Not only do I save a lot by not spending a dime on transportation, I also don’t have to submit leave application or take permission from bosses to take longer breaks.

Here is my story:

I graduated as a Civil Engineer back in 2016. And then I got a big fat salary job in a multi-million dollar industry. Just like what my college promised during my orientation. It was awesome!

Got you! Duh, guys, I’m just kidding. Like almost millions of young engineers in my country, my hopes too were shattered in my final semester when I ultimately realised that the last four years of hard-work meant nothing and it was not enough for companies to even consider me. Furthermore, not many companies showed up for recruitment and my entire batch graduated without a job.

And that too when I had no backlogs and I was pretty average in my class.

I did finally got some job offers under contractors and a few as salesman. They were offering me only around 100$ per month. Pretty ridiculous, I know!

Then I had to go to Hyderabad to waste another year to prepare for GATE. Trust me, it’s not a good move. Particularly when you are from a middle class family and already costing your parents a fortune. Also, I was like, I already studied, show me the money now!

Nonetheless, one year later, I didn’t do well in my exam and I found out that we were actually broke. Government of India decided to close the industry my father was working on and he lost his job and pension.  Case is still going on & judgement may pass in this lifetime, I guess 😀

Then I went to Bangalore, India. As a one year dropper and no work experience, it was hard finding a job. But after six months I finally got a job as a Game Tester. They were offering 300$ per month. It was my first break.

The job was in US shift meaning, for us, it was night shift. For a while, it went fine but after one and half years my health deteriorated so much due to lack of sleep and skipping breakfast that I was unable to continue my job.

Finally I returned to my home at Guwahati with little money that I saved. My rent in Bangalore was around 75% of my salary at that time. But as an introvert, I didn’t mind it much as I had the room to myself.

That is when I decided to go for remote job seriously. Truthfully, since college, I was looking for ways to earn online. But I only fell from one scam to another. I was not a good internet researcher back in those days.

I have fallen to a lot of scams because I was looking for a quicker way to earn money. Also, every genuine remote job demanded a specific skill set, and learning that skill-set would cost both money and time, which I didn’t have.

I have done it almost all, PPC websites, Data Entry Websites, Crypto Investment, Binary Trading and Forex Trading and around 4-5 MLMs finally realizing that none of these works long time, at least for me.

I did got paid by joining some survey websites too but they seem to prefer US and UK citizens and not Indians. I rarely got any surveys and when I did, the payout was low.

After a lot of internet research, I finally found a decent remote job company that was accepting Indians, which is Appen. I applied for a Search Engine Evaluator job, cleared their exam and got the job.

I have been working full time remote since 2019 as a full time web developer and as a part time search engine evaluator.

My internet research skill also got better over the years and I found there is a huge scope and opportunities in the field of remote jobs. Most remote jobs require some sort of work experience but there are a lot of entry-level remote jobs too.

Also, the remote job opportunities for US and UK residents are far higher than those for Indians. But that doesn’t mean people from our region can find remote jobs. It did took time, but I did made it.

I hope that the information on this blog helps you land a remote job and you can finally achieve the perfect work-life balance that you desire.

For more information, you can go to the contact page or send an email to info@jobsatremote.com

This website uses cookies to improve your experience while you navigate through the website. Out of these cookies, the cookies that are categorized as necessary are stored on your browser as they are essential for the working of basic functionalities of the website. We also use third-party cookies that help us analyze and understand how you use this website. These cookies will be stored in your browser only with your consent. You also have the option to opt-out of these cookies. But opting out of some of these cookies may have an effect on your browsing experience.
Necessary Always Enabled
Necessary cookies are absolutely essential for the website to function properly. This category only includes cookies that ensures basic functionalities and security features of the website. These cookies do not store any personal information.
Non-necessary
Any cookies that may not be particularly necessary for the website to function and is used specifically to collect user personal data via analytics, ads, other embedded contents are termed as non-necessary cookies. It is mandatory to procure user consent prior to running these cookies on your website.
SAVE & ACCEPT

An active membership is required for this action, please click on the button below to view the available plans.